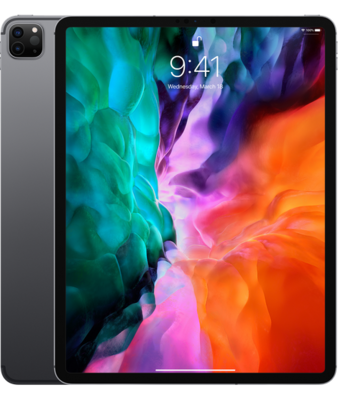 Breaking the rules of computing.

Your next computer is not a computer.

The 12.9-inch iPad Pro features an immersive, edge-to-edge Liquid Retina display.1 The new pro cameras, Wide and new Ultra Wide, combined with the all-new LiDAR Scanner enable entirely new experiences in the next generation of augmented reality (AR) apps. A12Z Bionic chip for powering essential apps and graphics-intensive games. Support for the new Magic Keyboard with trackpad2 and Apple Pencil.2 Faster Wi-Fi and Gigabit-class LTE.3 All-day battery life.4 And access to millions of apps on the App Store to transform iPad Pro into anything you need, anywhere you need it.

The edge-to-edge Liquid Retina display is not only gorgeous and immersive, it also features incredibly advanced technologies.1 Like ProMotion, True Tone and industry?leading colour accuracy, which make everything feel responsive and look stunning. Quite simply, this combination of features makes it our most advanced mobile display.

Advanced cameras — combined with a large display, fast performance and highly calibrated sensors — have always made iPad uniquely capable. The Wide and new Ultra Wide cameras help you frame the perfect photo or video. And together with studio?quality mics and Four Speaker Audio, you can even set up a multi?camera filmmaking rig.

LiDAR (Light Detection and Ranging) is used to determine distance by measuring how long it takes light to reach an object and reflect back. It is so advanced it’s being used by NASA for the next Mars landing mission. And it’s now been engineered to fit in the thin and light iPad Pro.

The custom-designed LiDAR Scanner uses direct time of flight to measure reflected light from up to five metres away, indoors and out. It works at the photon level, operates at nanosecond speeds, and opens up tremendous possibilities for augmented reality and beyond.

On the new iPad Pro, AR apps become even more realistic. Placing an AR object now happens instantly. Realistic object occlusion allows AR objects to pass in front of and behind real-world structures. Improved motion capture and people occlusion are more accurate than ever. And developers will be able to create even more immersive experiences.

iPadOS is designed to harness the power and performance of iPad Pro. Lightning?fast hardware and powerful software were designed in concert to make every interaction snappy and smooth. Which makes working with multiple apps at once and moving between spaces quick and effortless.

This product comes with a 12 month manufacturer's warranty.

Please note that all orders placed on the weekend will be processed on Monday morning.

The easiest way to calculate freight cost when viewing an item is to click the "Calculate Freight" link and then enter your postcode. If you are ordering multiple items, often there will be a freight saving - the total freight cost will be displayed at shopping cart time.