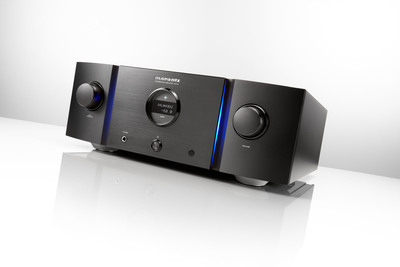 Amplifiers are at the core of Marantz history

It’s very first product was a high-quality preamplifier designed to make the most of the then-new LP record format. And with a history stretching all the way to that ground-breaking Audio Consolette – which Saul B Marantz started manufacturing in 1952, and which soon became the first real Marantz product, the Model 1 preamplifier – it’s no surprise that the company’s very latest Premium Series model, the PM-10, is an integrated amplifier built to set new standards with all of today’s music formats.

In fact, this massively powerful integrated amplifier is constructed more like a high-end separate preamplifier and a pair of monobloc power amps, but all in one beautifully finished case, designed both to maximise performance and create a strong visual statement.

Making an integrated amplifier with dual monobloc design fitting in a normal size cabinet is made possible by the use of a stereo switching amplifier. Its aim? To reveal the maximum musical involvement from everything from LPs to the latest high-resolution audio files and beyond, and with all the power and control required to drive the most demanding loudspeakers, allowing them to perform at their best.

To achieve such quality, while still delivering class-leading power, means optimising each section of the amplifier for its task, just as would be done in a design using a separate preamplifier and monobloc power amps.

Another important part of the noise-reduction here is the fact that the PM-10 is a purely analogue amplifier: many rival designs are today including digital-to-analogue conversion, or adopting digital amplification and volume control, but the Marantz keeps things as clean and simple as possible with its highly-developed all-analogue design.

The benefits of balanced audio layout have long been understood: unlike a conventional layout, one half of the signal path is in the ground plane of either an amplifier or a cable, balanced working uses two conductors or paths – one for positive, the other for negative – and an entirely separate ground to protect them.

For the PM-10, Marantz wanted the purest possible sound, plus the power and dynamics to drive and control some of the world’s most demanding speakers. To achieve this, they continued the balanced working found in the preamp stage right the way through to the power amplifier stage to its speaker outputs, and also adopted bridged working to develop the power required while maintaining that balanced design. This True Balanced Concept realizes a ground-free signal management from the input to the output.

Marantz has long built a reputation for choosing the best-possible components for its Premium Series products – and if it can’t find what it wants, it designs and builds the required part.

Like the partnering SA-10 Super Audio CD/CD player/DAC, the PM-10 is constructed to the highest possible standards, with a double-layered copper-plated chassis for excellent rejection of mechanical and electrical interference, and casework constructed from thick, heavy, non-magnetic aluminium panels. Both products also sit on aluminium die-cast feet.

This product comes with a 36 month manufacturer's warranty.

The above benefits are all subject to the terms, conditions and exclusions.

Please note that all orders placed on the weekend will be processed on Monday morning.

The easiest way to calculate freight cost when viewing an item is to click the "Calculate Freight" link and then enter your postcode. If you are ordering multiple items, often there will be a freight saving - the total freight cost will be displayed at shopping cart time.